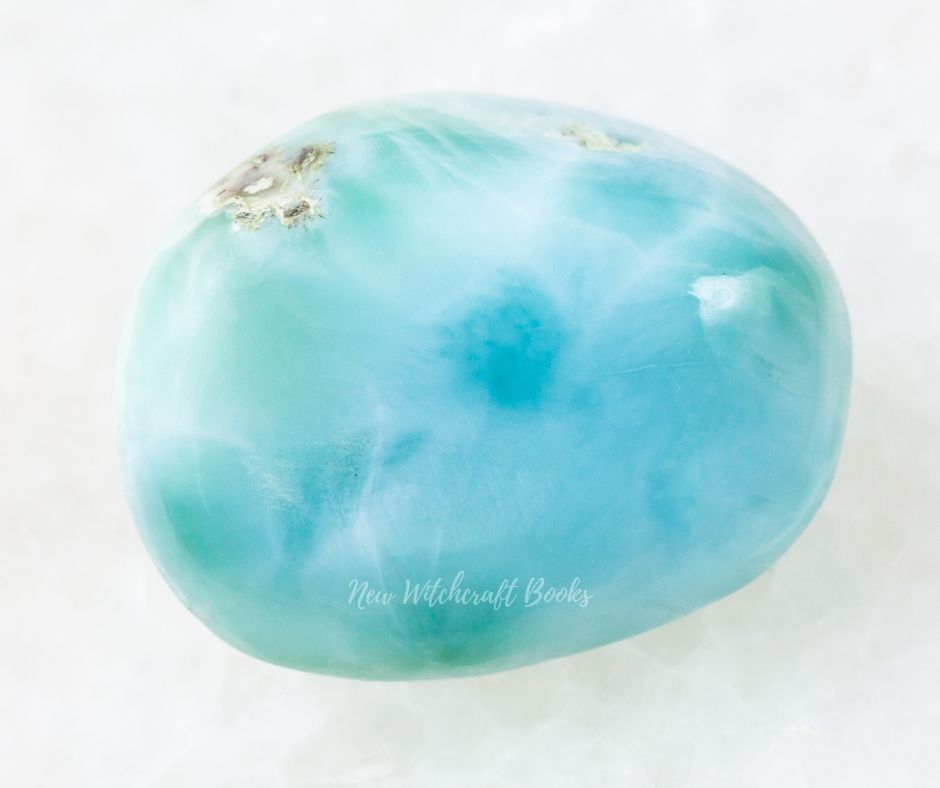 I remember clearly when I held the first Larimar in my hands. I can feel the energies of stones in the palm of my hands and this one really threw me off guards. It was a mixture of peace, calmness and a strong longing to get home, even a bit of homesickness. It didn’t really make sense to me at that moment, but the more I learned about this wonderful crystal, the more I loved it.

What is a Larimar?

Larimar is a rare gemstone that is found only in the Dominican Republic in the Caribbean. Its colors vary from white, light-blue, green-blue to deep blue. There is a variety of pectolites, but while other kinds of pectolites are found in many locations, only Larimar has this unique blue coloration, which is the result of copper substitution for calcium in the volcanic surroundings.

Originally, Larimar was discovered by Miguel Mendez and was later rediscovered by a member of the peace corps. It was first given the name „Travelina“, but then got a new name, a mixture of the name of Mendez’s daughter Larissa and the Spanish word for „sea foam“, which makes sense when you look at it. It was also at first thought that the gemstone came from the sea, but actually it originated from the depths of Bahoruco Mountain Range.

Even if we still don’t know if the legendary Atlantis ever existed, the Larimar has been connected to it from when it was first discovered. In the Atlantis legends, blue stones play a role in communication with the people of Atlantis and, from the description, they could have been Larimars. My logical mind highly doubts that, but when I touch a Larimar I always feel this weird homesickness – even when I am at home! To be honest, I gave up on explaining this and simply took it as it is.

Because the Larimar is such a new gemstone, there haven’t been any other mythologies or legends around it.

Larimar can be used to heal emotional wounds, strengthen relationships and bring peace. Its soothing energy helps to release stress, anxiety and depression. Wearing Larimar jewelry can help us feel more grounded and at peace with ourselves. Larimar also helps with communication, creativity and intuition. Larimar can also be used to heal physical problems such as digestive disorders, skin conditions and arthritis and tries to release blockades in health. It can also help you release any negative feelings or thoughts that might be blocking you from moving forward with your life.

Larimar helps to ground your energies during spiritual work by connecting with the Earth’s energies. It is a protective stone that shields you against negativity and unwanted energy from other people or the environment. It can also protect against psychic attacks by shielding one’s aura from outside influences. Larimar is a stone of love that helps bring unconditional love into one’s life by opening up the heart chakra, so it is a good idea to put it on your heart chakra if you have feelings of guilt or anger. You can also put it on your third eye chakra to help with mental clarity.

How to work with Larimar’s

Like with so many gemstones, the Larimar works best when it touches your skin. So wearing jewelry with Larimar is the easiest way to benefit from it. But it is also a great addition to your office space – especially when you are on the phone or in online meetings all the time – or for your altar.

A Larimar can be cleansed best under running water or by smudging. Don’t let it soak in water for a long time! It can be charged in the light of the full moon or by putting it in a circle of Selenite crystals.

I find Larimar to be one of the most beautiful crystals with many healing properties. But as with every crystal, this is highly individual, and sometimes you just need the right time to get closer to a gemstone.

Please Note!
Most of the links on this site are Amazon affiliate links. This means if you click on the link and purchase the item, I will receive an affiliate commission at no extra cost to you.